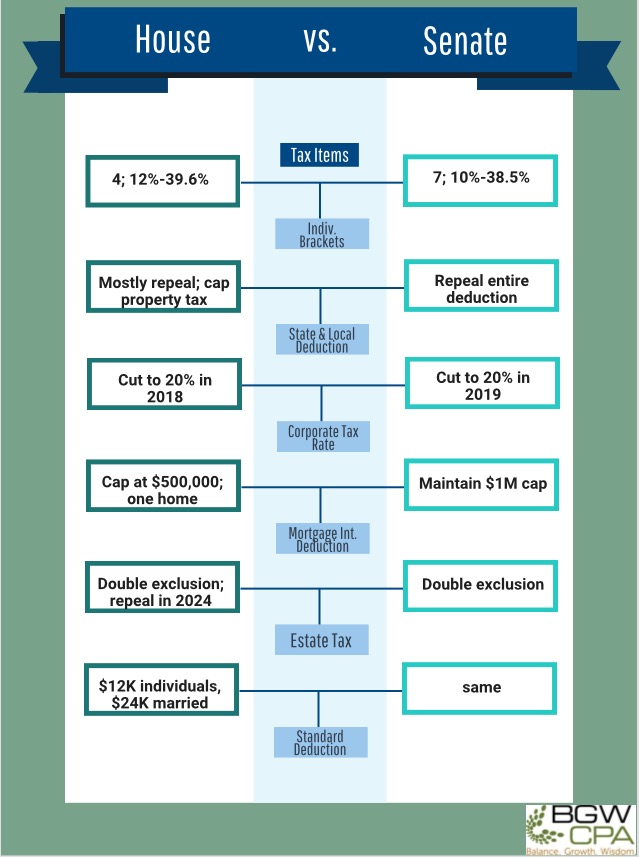 The Senate tax plan was revealed last week. Though changes are still to come, there are some distinct differences between it and the House plan that we previously covered. Below you’ll find all you need to know as well as an interesting plot twist. There had to be a plot twist.

These items (and more) are covered in detail below, but here’s a handy graphic on the most highly anticipated changes: 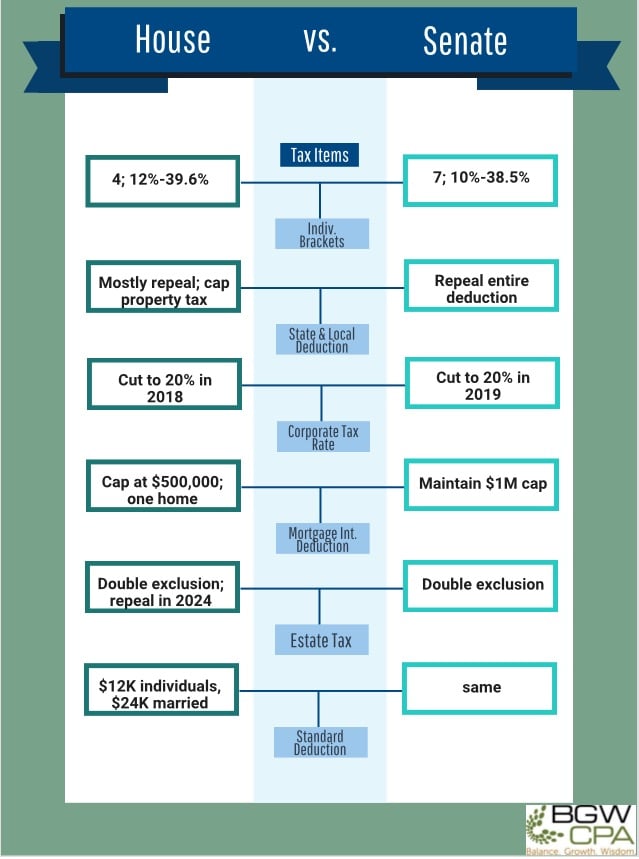 The House is looking to shrink the number of brackets to just four with the thresholds for married taxpayers filing jointly:

For both plans, the thresholds would be adjusted for inflation based on chained CPI, a formula that would subject more income to higher tax rates than under the regular consumer price index.

The Senate is seeking a corporate tax-rate cut to 20% starting January 2019.

The House is seeking an identical 20% corporate income tax rate starting in 2018.

For partnerships, limited liability companies, and other so-called pass-through businesses, the legislation would provide a 17.4% deduction for non-wage income. The deduction wouldn’t be available to many types of service businesses but would be for those taxable income falls below $150,000 for joint filers or $75,000 for all others.

Qualified pass-through business owners could choose to count 70% of their income as wages—subject to their individual tax rate—and 30 percent as business income, taxable at the 25 percent rate. Or, they could set the ratio of their wage income to business income based on their capital investment.

The House bill also provides for a 9% rate for the first $75,000 in net business taxable income of an active owner or shareholder earning less than $150,000 in taxable income through a pass-through business, instead of the ordinary 12% rate.

Preserves the existing mortgage-interest deduction for home purchases with up to $1 million of debt.

Reduce the home-mortgage interest deduction for new purchases to $500,000 of debt (down from the current $1 million), and limit the deduction to one principal home.

Increase the standard deduction to $12,000 for individuals and $24,000 for couples. This is nearly a double increase.

Increases the credit to $1,600 per child younger than 17 and include an additional $300 credit for each parent as part of a consolidated family tax credit.

Preserve the estate tax while doubling the current $5.49 million exemption for individuals.

End the estate tax after 2024. Before then, double the current $5.49 million exemption for individuals.

Restrict interest deduction for businesses to 30% of adjusted taxable income, while allowing interest not allowed as a deduction to be carried forward indefinitely.

Companies would be prevented from deducting interest expenses that exceed 30 percent of their earnings before interest, taxes, depreciation, and amortization. The limit wouldn’t apply to real estate firms and small businesses. Companies that use loans to finance high-cost inventory—such as car dealers—will be given the ability to completely write off their interest payments. In exchange, those businesses won’t be able to immediately write off their capital investments.

The House was prepared to take its plan to the full chamber this week for a vote, and the Senate planned to begin debate and mark up starting on Monday.

And now for that plot twist…

President Trump on Monday tweeted from Asia that he is “proud” of lawmakers for getting “close” to approving a tax bill, but that he wants to see more tweaks. Specifically, he’s calling for Republicans to repeal the Obamacare’s Individual Mandate, cap the top income tax rate could be reduced to 35%, and pass the rest of the savings to middle income cuts. The CBO estimates that cutting the individual mandate would save Washington $338 billion over 10 years.

The question is whether or not Congress will listen to him. The House Ways and Means Committee already decided not to put the individual mandate repeal into its tax plan, and House Republicans already face a challenge in holding on to blue-state GOP votes due to its proposed plan to end state and local tax deductions. Including Trump’s requests could derail their tax plan. Not including those requests could also cause pushback from conservatives intent on unraveling Obamacare by any means necessary. Just as things were starting to move along, it gets sticky again.