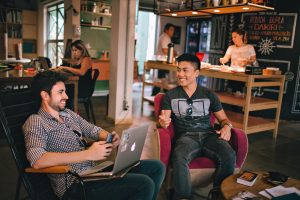 Back to Atypical Insights
The Vault Business Strategy & Improvement

Everything You Need To Know About Hiring a Freelancer

By 2020, 40% of the U.S. workforce is expected to be independent contractors, according to this study by Intuit. That’s a jump from the 57.3 million Americans who are already freelancing be it for their main source of income or to supplement it. There are several reasons why this is occurring -- access to technology and increased demand from workers for more flexibility -- but one thing is for certain: The freelance economy is strong and on the rise. Is hiring freelancers right for you?

In general, this is a win-win for both employers and workers. Employers realize tremendous savings with independent contractors, and they generally lower their risk, too. Freelancers themselves gain flexibility. Ask anyone doing it and they’ll likely cite reasons like the ability to work around family schedules, the ability to travel freely, to work in casual clothing at times that suit them, and so on. What they give up in benefits and full-time job stability is made up for with total flexibility.

That being said, contracting with freelancers shouldn’t be taken lightly. Traditional employment does still have its benefits, so don’t assume that every position in your company should be assigned to a freelancer.

Below is a list of pros and cons we find to be true when utilizing the services of freelancers/independent contractors, as well as some tips for overcoming the challenges.

While it’s true you’ll pay a higher hourly rate to a freelancer than for an employee, you can expect to save 20-30% annually when you factor in the lack of benefits you normally provide, Medicare, and Social Security payments, and so on. Independent contractors usually also work remotely on their own equipment, so you’ll likely eliminate the need for office space and supplies for that person.

Also, remember that, for the Affordable Care Act, having 50 or more full-time employees requires compliance; for EEOC only 15. Using freelancers in place of employees can get work done without adding to headcount.

Finally, if you’re looking to expand into a new market, freelancers can help you expand into that market without a huge budget outlay. If things don’t work out in the new market, you can walk away with little financial impact.

Freelancers/independent contractors have no right to collect unemployment, almost never have a right to workers’ comp, or generally have the right to sue for HR-related issues like harassment or discrimination. This makes them a lot easier to terminate if they are not working out.

Provided you’ve done your due diligence on the contractor (and we generally recommend finding them through referrals instead of online platforms -- more on this later), in general, the work produced by freelancers is very good. These are people running their own businesses that benefit greatly from repeat customers. As such, they generally produce top-notch work in an effort to maintain their existing client relationships.

As for the cons:

We purposely list quality in both the pro and con column. Here’s why: The rapid rise in online talent-pairing programs allows anyone (ANYONE) to post a profile and promise competent work at a low price. You could potentially end up with someone who proves to be an utter waste of time and at least some money.

Even worse, this anonymous person could potentially put your reputation at risk if your relationship doesn’t work out. Bad word-of-mouth press is one thing, but just imagine the nightmare scenario of a rogue freelancer who now knows your social media passwords because you hired them to run your page!  Things could get ugly quickly.

We highly recommend utilizing the power of your networking circles to find reliable, competent, and trustworthy freelancers, and not online matching sites. Request a portfolio of work and local contacts as references. And, if you ever do give your passwords to a freelancer and need to terminate the relationship, be sure to change everything before having that conversation.

Not Right For Every Position

As stated above, traditional employment still makes sense in certain situations. In general, we have found that any job requiring relationship-building skills (such as someone tasked with developing clientele), or anything related to business development (sales), is best handled in-house. Traditional employees are present in the office and have an awareness and knowledge of your company that remote freelancers just don’t. Additionally, regular employees tend to feel a deeper sense of commitment to your company and sense of motivation to improve the bottom line.

In addition, if the job in question requires a lot of oversight, an in-house employee is clearly preferable.

In general, save relationship-building, business-building, and highly-supervised jobs for employees and task-oriented jobs for freelancers.

The amount of control you hold over a worker defines whether they can legally be classified as a freelancer or employee. You’ll need to be prepared to defend your choice to classify a worker as a freelancer in the event of an audit from the IRS or the Department of Labor. Both agencies are scrambling to play catch-up with this new working model. In 2014, employers had to pay $79 million in back wages to more than 100,000 workers who were determined to be employees, not independent contractors.

There really is no specific litmus test to make sure you’re hiring right and not running the risk of being cited for misclassification, but the IRS has some common law rules in place to help you determine which employment status is appropriate for your worker. As a rule, an independent contractor controls their business. They determine who, what, when, where, and how the work is performed, and set pricing.

As always, reach out to us for assistance. We are happy to help you determine what working relationship you have and devise a strategy for best using independent contractors in your business.

The gig economy changing the landscape of the workplace. Hiring an independent contractor isn’t the right call for all positions, but a freelancer can be a perfect solution for short-term projects, one-off tasks, infrequent work, or work that doesn’t need to be performed onsite or during traditional hours. As long as you categorize correctly, there are more ways than ever to find the right mix of in-house and freelance talent to grow your company.  We look forward to helping you do it.